I am been repaid with evil for good says Rochas Okoroch, after all what he has done to make All Progressives Congress (APC) accepted in Imo State.

Okorocha, whose election was upheld on Monday, expressed sadness how APC party which he helped and nurture in the south east paid him back in what he described as evil way and also suspended him from the party.

The immediate former Imo State governor Rochas Okorocha has lamented how he was treated by the All Progressives Congress (APC).

However alleged, repaid his courage and sacrifices with evil in the south east. The Imo West Senator challenged the current administration in the state to investigate his eight years in office, saying no government in the state can meet his records of achievement as governor. 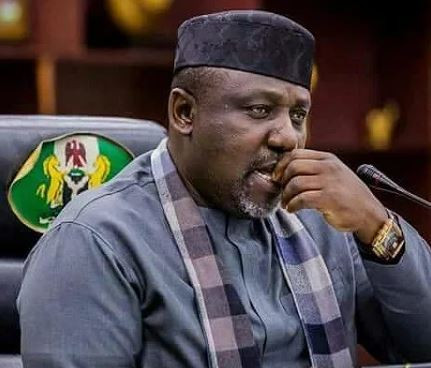 Speaking with newsmen in Abuja, Okorocha who insisted that he still remains a member of the APC, said the party may go into extinction when President Muhammadu Buhari exits.

Commenting on his political battles as governor, Okorocha said he suffered a lot of attacks and almost lost the election in 2015 for sharing the same political platform with Buhari.

“Unlike other governors from the north that rode on the name Muhammadu Buhari to power, the name Buhari had a negative effect on my campaign for second term. But I was determined to overcome that because I knew what we stand to gain. But today, the same party says they are suspending me,” he stated.

Reacting to allegations of misappropriation funds during his tenure as the governor of Imo state, Okorocha said that apart from leaving a whooping N45.5 billion in state coffers, he will challenge anyone who can beat his record of development projects. He blamed his travails on some unnamed top leaders of the APC whom he accused of conniving with opposition elements in Imo state to try to undermine him politically and ensure that he was not available for the inauguration of the National Assembly and the election of principal officers.

He said: “If anything, the party repaid me evil for good. There was no challenge I did not face or bad name I was not called in my state. They brought in people who fought me when I was building the party at state level to fight me over the control of the party.

“I don’t want to talk about it but my party did not treat me well. I have never thought of leaving the party but what happens next will be determined by time. My only worry is that the party may disappear with the exit of President Buhari if the ongoing injustices are not addressed”.

Speaking on the ongoing investigations by the Economic and Financial Crime Commission (EFCC) especially the various allegations of maladministration levelled against him by Governor Emeka Ihedioha, the Senator said he believed he had not done anything wrong to warrant such treatment.

He said that at present the anti -graft agency is investigating three of his organizations, including Eastern Palm University and Rochas Foundation Schools, adding that as far as he was concerned the Imo state governor was only chasing shadows.

According to him: “I have thrown a challenge to any bank who feels that I have borrowed money from it on behalf of Imo state to come and contradict me,” adding that there are genuine evidence of laudable projects that stands to his credit in every part of the state.