Manchester (United Kingdom) (AFP) – Marcus Rashford scored twice as Manchester United made the perfect start to their Premier League season by inflicting a 4-0 defeat on Frank Lampard in his first match in charge of Chelsea on Sunday.

Ole Gunnar Solskjaer’s men were in need of a fast start to the campaign to erase memories of a terrible end to last season and got it.

Rashford’s early penalty opened the scoring against the run of play, but three goals in 16 second-half minutes from Anthony Martial, Rashford and debutant Daniel James had Old Trafford in raptures.

“We took risks but that’s the way here, you’ve got to go for it. It’s risk and reward and today we were rewarded,” said Solskjaer.

Harry Maguire and Aaron Wan-Bissaka also impressed at the back on their debuts after United spent £130 million ($156 million) on the pair over the summer to shore up a defence that conceded 54 Premier League goals last season.

“It is a great start for myself and the team. We rode our luck a bit first half but second we were much more ourselves,” said £80 million signing Maguire after his first game as the world’s most expensive defender.

“We knew there were only two clean sheets last year here (at Old Trafford). We need to make it a fortress.”

However, questions will be asked of Chelsea’s decision to let experienced defender David Luiz leave to join Arsenal earlier this week as the Blues struggled to contain the United counter-attacks despite dominating long spells.

Lampard’s first team selection was a bold one as he put his faith in youth with Tammy Abraham and Mason Mount handed starts. 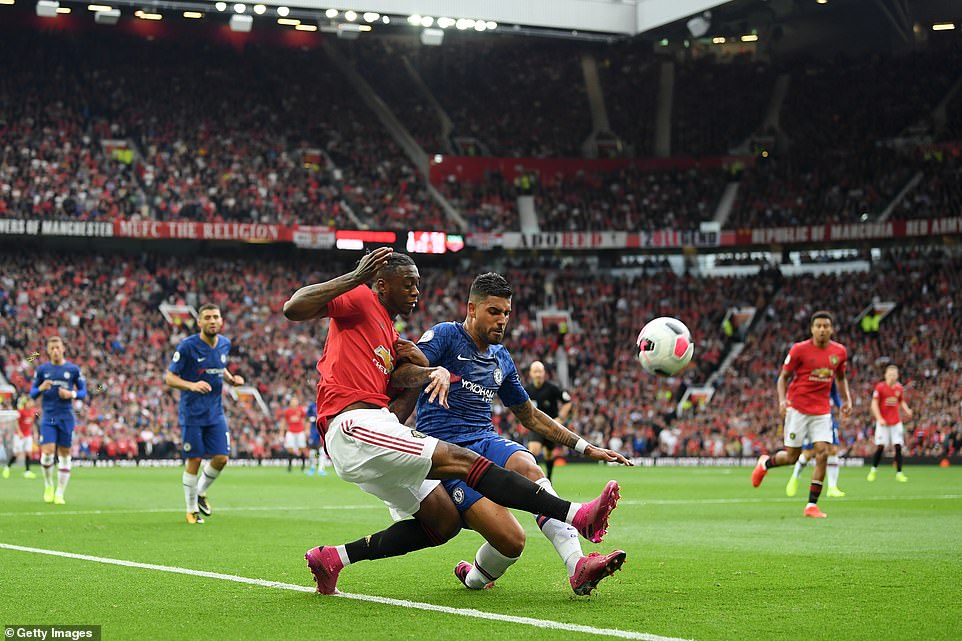 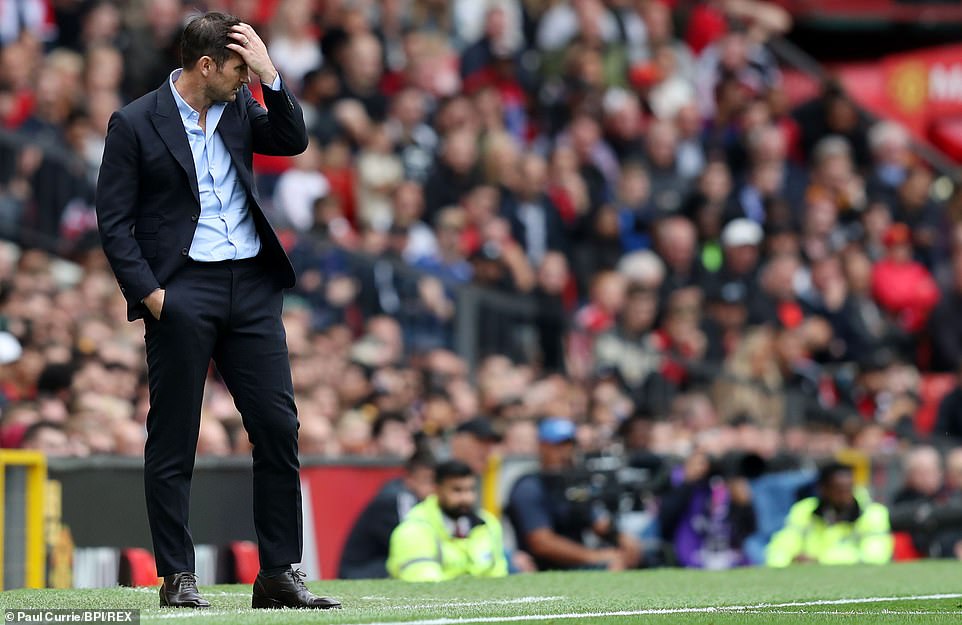 Chelsea were banned from making new signings over the summer and Lampard also has a number of senior players out injured, but refused to make excuses.

“The team we put out today was clearly competing in the game for long periods but we made four mistakes and they were clinical in the way they put them away,” said Lampard.

“They are a counter-attacking team, it’s a big strength, they have pace, and if you give them opportunities they will counter. For massive parts of the game we didn’t allow them to do that. (There are) loads of lessons for us.” 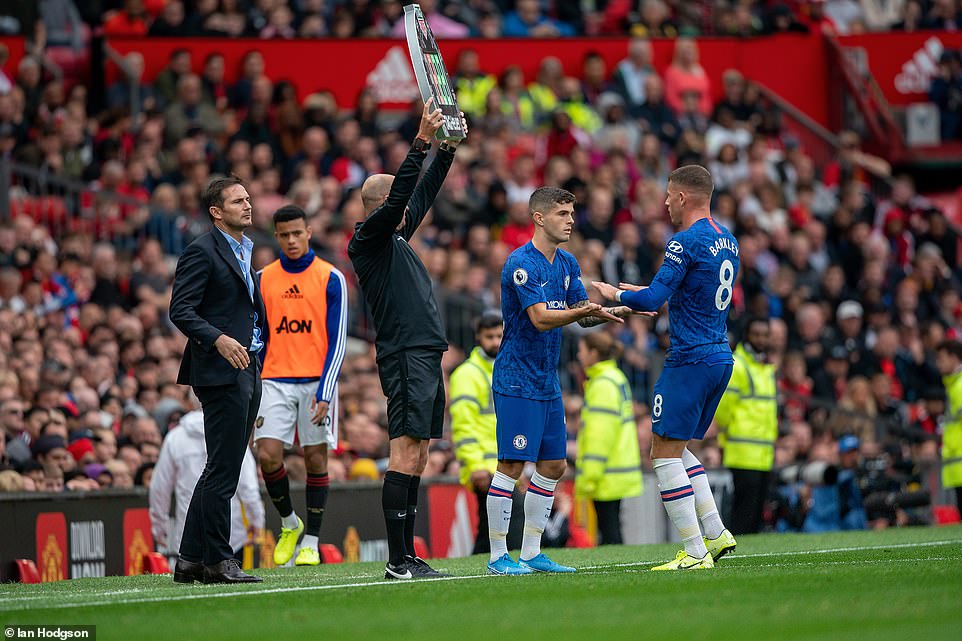 Chelsea started the better as Abraham smashed a shot from the edge of the box off the post, but the heart of Lampard’s defence always looked fragile.

Kurt Zouma had already gotten away with gifting possession to Martial on the edge of his own box as the Frenchman shot weakly into the arms of Kepa Arrizabalaga before he was turned easily by Rashford and hauled the England striker to the ground.

Rashford dusted himself off to blast the penalty high past Kepa to open the scoring.

United needed David de Gea to recover his best form as he made fine saves from Ross Barkley and Emerson Palmieri, while the Italian international also blasted off the inside of the post.

But at the other end, Rashford and Martial provided the clinical touch to kill the game off in the space of 60 seconds that Chelsea lacked.

Martial bundled the ball home at the far post from Andreas Pereira’s cross and Paul Pogba then played provider with a brilliant ball over the top for Rashford to burst in behind before coolly slotting past Kepa.

Pogba was the creator again for the fourth as the Frenchman played a one-two with Rashford and powered through the Chelsea defence before laying off to James, who got the benefit of a big deflection to find the bottom corner.

“We’re fitter, we’re stronger, you can see that second half we are more than capable of lasting games,” added Solskjaer.

“We’ve had six good weeks, but it’s still work in progress. We are not anywhere near the finished article.”

Spurs have a chance of lifting the trophy said Jose Mourinho

Jose Mourinho has named the four teams he believes can mount a title challenge this season – but ruled out a surprise shot at glory from his former sides Chelsea and Manchester United.

The Portuguese manager, making his Sky Sports punditry debut, was questioned about who he believed could lift the coveted trophy in May.

And Mourinho even revealed he believed Manchester City‘s substitutes would be more likely to triumph than the two giants he once managed – and that Tottenhamcould also be in with an outside chance.

He said: ‘Four [teams can win the title]. Man City, Tottenham, Liverpool and Man City B team. The players that were not already involved, I think the [City] B team could fight for the title.

‘I think if one of the teams plays magnificent today, I don’t believe they are going to resist in the title race. I don’t see also Arsenal to resist to a title race. Last season was phenomenal but I think Tottenham has to join it.’

Former United full back Gary Neville agreed with the 56-year-old tactician, and also wrote off the side he supports from mounting a title bid.

He added: ‘I don’t see United winning the title. As a United fan all I want them to do is to create a strategy and stick to it. David Moyes came in, Mata 5ft 8ins, Fellaini 6ft 4ins, then they sacked David Moyes, then Louis van Gaal came in a lot of technical possession players to fit his model. Then they sacked him.

‘Jose came in, signed Bailly, Ibrahimovic – very physical, gave him a new contract, then cut that path short. Then Solskjaer has come in with British players. Four different strategies. Don’t keep changing all the time. And the club have been doing that.’

Mourinho also explained that he believes both City and Liverpool will be strong enough to fend off the chasing pack, although he hopes that the two sides’ rivals can one day return to the top level.

‘We would love United, Chelsea and Arsenal to also be at that level,’ Mourinho said. ‘It would be something incredible. Sometimes unpredictable things can happen. Who knows?

The former Blues boss also thinks that Frank Lampard’s side will be able to negate the effects caused by the club’s transfer ban, but admitted that his first television appearance back in England wasn’t an easy one.

He added: ‘If someone who could answer a transfer ban it’s Chelsea. They can get Zouma, Abraham. If that happens to another club it would be much more difficult to organise a difficult squad.

‘So I hope that something great happens with them [Chelsea]. I come just for the game and just to learn and listen to their opinions. You have to say it’s not an easy debut for me.’